The trip to Nagarhole was much awaited as it was to be the first family trip!

We started by 6.45 AM from Sis2’s home. Sis1 and family were to meet us on the way near the NICE corridor connecting Electronic city to the Mysore road. However, they couldnt start coz of Adi… he was adamant that he would go only in the red car 😀 Somehow, we spoke to him and convinced him to come upto that point in their car [just 5 min from their home] and then he could hop into the red one 😀

Thus began our journey!! The drive on the NICE road was good. Once on the highway, traffic increased a bit as was expected. We stopped for breakfast at Kamat on the B’lore-Mysore highway, some distance from Ramanagaram. Food quality was just so so… 😦  On reaching Mysore, we took the ring road connecting to Hunsur road, thereby avoiding the city traffic. Drive upto Hunsur was good. However, from Hunsur, it was a little tedious on a single lane road that stretched through the forest. There wasnt any traffic and we ambled on speed limit being 30kmph … looking out for animals on the way. We hoped to reach the destination, a homestay in Kutta, by lunch time.

It was quite hot and the trees were still bare post winter. And, the dryness all around proved to be a disappointment for sis who was expecting to see a green cover. Few trees were green though, and few more were sprouting new leaves, putting on a pale green appearance. But the thing that caught my eye was the burst of vibrant yellow flowers here n there. The pale green of  the leaves and the bright yellow of the flowers made for a beautiful combo. Pity that we could not take a nice pic of that tree 😦 On closer look, I figured that it was Cassia fistula!! The joy was kind of doubled on being able to identify the plant!! kind of a high for a former student of Botany 😀 We spotted a few deers and langoors on the way . Also, there were a few tiny settlements within the forest area. We wondered how the people lived here with very few or no amenities at all!  The slow drive made Adi very restless and he was on the cranky mode, almost getting on our nerves, when we reached Kutta, much to everyone’s relief. 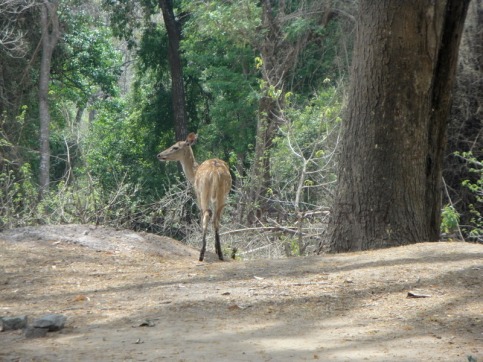 We reached the homestay at 2.30, in time for lunch. The homestay that we had booked was an old traditional type of house. The hosts were in the newer house which was a little distance away. The whole place seemed very peaceful and the kids were overjoyed at the freedom it offered. They ran all around, went from room to room inspecting the house and then roamed about freely. The joy was so evident on their faces. As for me, it was the variety of flowers that were inviting. I started clicking pics enthusiastically, but was reminded that we were to have our food. So i had to stop after clicking few of them.

After lunch, we generally loitered around in the compound. Large area was covered with pepper that was put out for drying. We clicked a lot many pics of the flowers that had been grown all around. We sent the kids in for their afternoon siesta, and would have ouselves gone and happily plonked over the bed. But the hosts informed us that the last safari at the forest would start at 5 PM and that we had to register at least by 4.30PM. So we hurriedly readied and got into the cars. We reached the regsitration office in time and got our tickets.

It was very hot …we got into the vehicle and eagerly waited for the driver, to start the journey into the forest. Once on the trail… we looked out expectantly, cameras ready in hand! We saw a number of deers which roamed freely and did’nt seemed bothered by the intrusion into their territory. Probably they have gotten used to seeing some species that comes by and admires them and does something while looking intently at them. Then we saw a bird and some more deer…. A peacock was spotted by a few in the front, but the collective excited noises made it take flight and hide among some bushes 😦  Not to be visible again. Dejected, we just kept looking around hoping to spot some interesting animal…hearts of hearts, most hoped and wished to spot the Tiger! 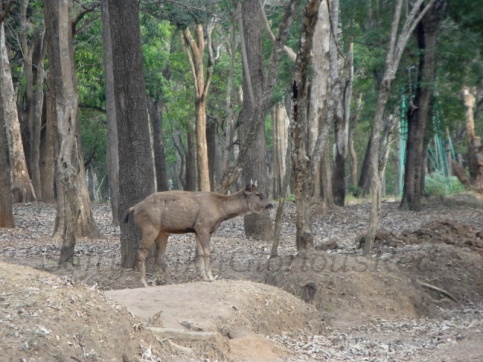 We then saw an elephant in the distance, near a water body in the jungle … the whole place was full of bamboos.It was a lovely sight. And a bird sitting on a twig… not much idea about birds. Though we did not spot any exotic animal, we were just taking in the sights of the jungle. Noticed the yellow flowers every where we went. Also, it seemed to be only plant in flowering at that time. I wasnt complaining 🙂 It made me happy to see the lovely brightness amidst green and brown all around. But there were a few who were whining and complaining about the lack of any other animal … so much so that they were ‘bored’ of the deers! I wonder how can one get bored in the lap of nature. Do they see deer in their backyard every single day? 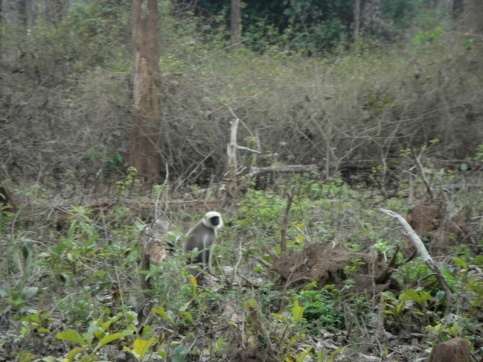 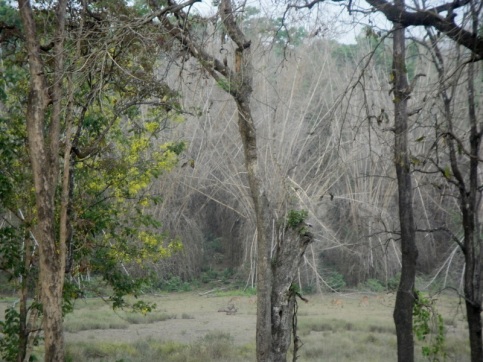 We were almost nearing the end of the safari, when we spotted a peacock again. Its beautiful feathers… a burst of colour in the dry brown of the surroundings. I woke Ammu, she had fallen  asleep,  to see the lovely creature. Though, I wondered if it would actually register in her sleepy mind. More deer and a troop of langoors were spotted before we came back to the starting point. Adi was excited to see the animals but was clumsy all along…maybe due to the lack of sleep.  We sat on the benches along the road, to have some snacks. But were asked to leave,as it was past 6.00 in the evening. The forest is a protected one and the path through it is out of bounds from 6 PM to 6 AM. Tired but happy, we headed back to Kutta, to the homestay. 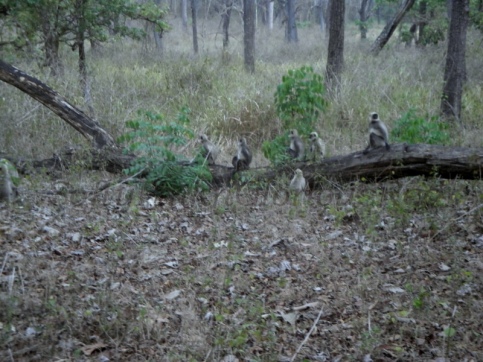 It was the day of the finals of the world cup cricket. By the time we reached, the Indian team were out on the field, while the Lankans batted. Everone sat down to watch… all excited and anxious about the outcome. We had our dinner while watching the match. Our host had promised a complimentary night safari for us… we were to go into the jungle at night!! Dad and sis1’s in laws wanted to watch the game. Adi’s dad too. But we somehow convinced him to accompany us. So, after dinner, we all (me, sis1, sis2, bil1, bil2, ammu n adi) got into the jeep … the elders wouldnt have been able to fit in anyway. Equipped with a search light, we set out into the Wayanad forest [Kutta borders karnataka and kerala].En route, we even got welcome to Kerala messages from the respective mobile phone operators!

The adventure seemed thrilling. Esp, when we turned back to see the pitch dark spread behind us. The driver spotted an elepant and we all turned around to look at it. He mentioned that there was a calf too but I couldnt see it. We just slowed for a few moments and proceeded lest it angered the mom who was having a quite time with her lil one. Many sets of beady twinklings eyes were spotted by the others. These too I couldnt see… maybe it had to do with the angle of the search light beam from the drivers position and my position at the rear end of the jeep 😉  The kids fell asleep from the exhaustion of the days happeneings. Nevertheless, we enjoyed the drive through the forest in the cool night. An unforgettable experience it was!!

We returned to the homestay…  to the tensed spectators, who found our chirrupy selves a distraction. They did’nt seem even a bit bothered about the fact that all their kids  were in the jungle at that hour of the night. Winning the world cup was all that seemed to matter to them at that time 😉 We put the kids to sleep and settled down to watch the remainder of the match that seemed favourable to the Boys in Blue! After the magnificient six was hit by Dhoni, we all had rosogullas to celebrate the win. Sounds of crackers bursting were heard in the distance. We wondered about the scene on the streets of Bangalore. Must have been like Diwali!! After the awards presentation ceremony, the speeches and the victory lap, we went to bed… happy, excited and energised!!

5 thoughts on “Trip to Nagarhole!”

All the images on this blog are copyright of SoftyPinknGloriousRed, unless specified otherwise. The photographs may not be copied, reproduced, redistributed, manipulated, projected, used or altered in any way without the prior express written permission of the author.